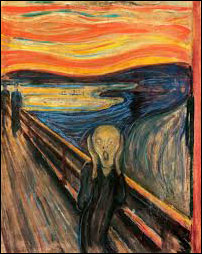 Some have wondered what’s behind the name. As stated in the premier issue (June 2001), The Scream began back in the early 1980s as an idea to publish in print form the very thing that this e-journal is now doing. I knew a lot of artistic and literary talent that needed (was screaming for) a venue, yet after all was said and done — and reality hit — the cost and time to produce such a venture proved too daunting. At the time, I had too much on my plate and the “grand idea” was limited to only a few prototype copies. One of the items it contained was a call for submissions for art inspired by Edvard Munch’s “The Scream,” a painting that rather sums-up the horrors of seeking legitimate representation — not to mention getting published — as an artist or writer.

The wide-reaching power of the Internet has realized The Dream far beyond the wildest of expectations. Everyone at TheScreamOnline is thrilled at the growing and faithful readership that spans the globe. A staggering number of eZines now flourishes on the Web, and a brief perusal of only a few quickly shows the vast amount of design talent and imagination that otherwise might not have been accessible to the public-at-large.

On January 22, 1892, Edvard Munch wrote the following in his diary:

I was walking along the road with two friends.
The sun was setting.
I felt a breath of melancholy—
Suddenly the sky turned blood-red.
I stopped, and leaned against the railing, deathly tired—
looking out across the flaming clouds that hung like blood and a sword
over the blue-black fjord and town.
My friends walked on—I stood there, trembling with fear.
And I sensed a great, infinite scream pass through nature.

We printed the above paragraph in the October issue after 9/11. Munch’s prophetic words were especially chilling in light of that catastrophic event. A year later I wrote, “Thirteen new moons have passed and we seem to be no closer to an understanding of just how fragile is humanity’s foothold on this planet. We need not look in fear over our shoulders; guard dogs, fences, and locks on our doors and windows are useless. We only have to look within to see the demon. Our greatest threat and enemy is ourselves. For that reason alone, we need to embrace the beauty of Art to grace our lives and hope that the fruit of the Muses will prevail.” I maintain that our salvation may lie in the hands of those who embrace beauty, those in whose works celebrate the majesty and purity of life itself.

The ScreamOnline logo, images, and written material are
©2001-2017 Stuart Vail unless stated otherwise.
“TheScreamOnline” logo is a registered trademark of TheScreamOnline.
All artists and writers retain their own copyrights.
The copying or distribution of any material for commercial gain
is strictly prohibited unless authorized by the webmaster.
• All Rights Reserved •